After a particularly harsh winter, Brian sinks into a deep depression. Completely isolated and with no one to talk to, he does what any sane person would when faced with such a melancholy situation; he builds a robot. 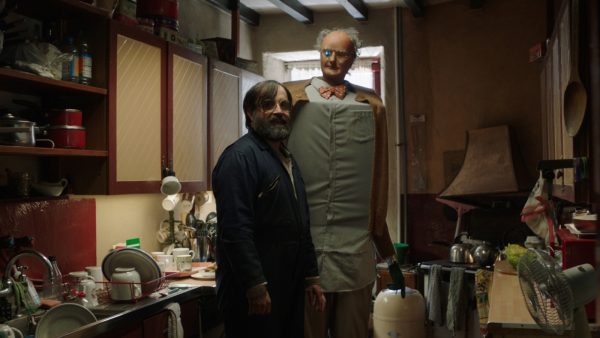 Artificial intelligence developing its own consciousness is nothing new to sci-fi cinema, whether serious or comedic, and so it’s hugely refreshing to see someone take a totally different crack – with a little budget in the distant wind of North Wales no less.

Jim Archer’s quasi-mockumentary Brian and Charles, developed from his 2017 short film of the same name, follows the exploits of eccentric, cabbage-obsessed inventor Brian (David Earl) as he leads a reclusive, solitary existence in rural Wales building impractical inventions like a flying cuckoo clock and trawler nets for shoes. When the biggest drama in the village involves a stale Choc Dip, who can blame his boredom?

But one day, Brian decides to build himself a companion robot, consisting of a mannequin head attached to an old washing machine and Something used for legs. Yet, to Brian’s surprise, he soon discovers that the bot, which took the name Charles Petrescu and learned English by ingesting a dictionary, has developed a mind of its own, drawing the unlikely father-son duo into a journey of self-discovery. .

Archer’s film is presented as a mockumentary, though it’s obviously more of a cute storytelling device than something you’re encouraged to practically consider. The camera crew occasionally steps in and Brian will acknowledge the presence of the camera from time to time, but that’s largely a creative choice made for the comedy. When Brian first encounters Charles who has come to life in his cozy country home, the scene is executed in the genre-pamphlet style of a found horror film.

As fun as David Earl is as our human protagonist, the show’s star is Charles, a crude cyborg model that looks a bit like Jim Broadbent. It’s obvious to anyone watching that the filmmakers simply put a man in a taped-up suit, which only adds to the production’s understated charm, as if it’s being put together by friends in their own backyard. 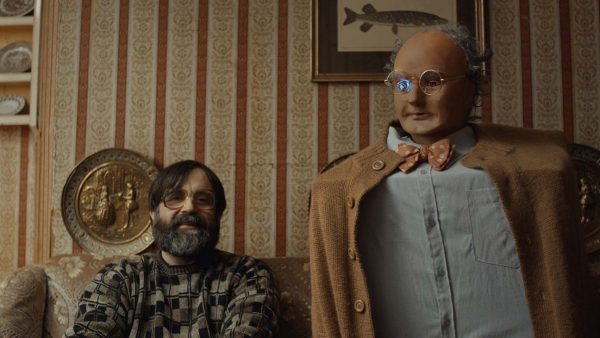 Charles is portrayed in the film by co-writer Chris Hayward, who delivers an impressive physical performance that approximates the rigidity of an actual robot. Yet, as Charles becomes more aware of the world around him, there are also flourishes of recognizable human movement, similar to that of an excited child. What really seals the deal, however, is the inclusion of a hilariously deadpan robotic voice – think a fancier variant of Microsoft Speech – which only makes the character’s concise one-liners even funnier.

Brian and Charles soon enough fall into a typical but surreal father-son dynamic, as Charles’ childlike curiosity about the world clashes with Brian’s desire to protect him from harm. In one of the script’s most inspired gags, Charles goes through the expected rituals of adolescence, like listening to heavy metal music loudly and moodily rebelling against his “father.” When Charles insists that it isn’t fair that he isn’t allowed to leave the house and explore the nearby town, Brian tells him in the most predictable fatherly rhetoric, “Life isn’t correct”.

The first hour of the story is so much fun, in fact, that it’s a shame that some conflict must inevitably arise, when a local family learns of Charles’s existence and plans to take possession of him. While this predicament briefly touches on the intriguing notions of free will and ownership, it also inherently tears us away from the dizzying, freewheeling pleasure of a soul-winning robot. The finale, at least, returns to Brian’s status as an eccentric inventor in a fun way, and ends somewhat sweetly as long as you don’t question the logistics too much.

what is really Brian and Charles in a word; don’t overthink the finer details, but bask in the offbeat comedy, proving once again that quality ideas will always prevail over massive budgets. While paired with a show-stealing sidekick, it’s also a great showcase for David Earl’s talents; his motormouth shtick might get boring in the hands of another, but he brings a subtle humanity to Brian that ensures he’s a genuinely sympathetic rather than pitiful presence.

All in all, Charles is unlikely to end up standing tall alongside cinema’s pantheon of iconic robots, but one suspects the filmmakers are probably fine with him as a more niche entry. This sweet and enjoyable take on a familiar concept stands out for its charming DIY style and David Earl’s engaging comedic performance.