A disconnected teenager enters into a relationship with a man twice her age. She sees him as the solution to all her problems, but her intentions are not what they seem. 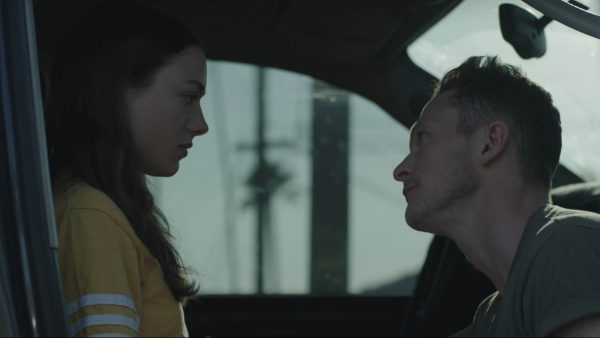 Jamie Dack’s feature debut Palm trees and power linesadapting his 2018 short film of the same name, is likely to be one of the most talked about films at this year’s Sundance, both to mark the surprising big-screen arrivals of an assured filmmaker and a a skilled lead actress, and for her audaciously uncomfortable depiction of an abusive relationship.

Seventeen-year-old Lea (Lily McInerny) is a disgruntled youngster who has long since become lethargic from countless aimless outings with drunken pals and unbiased dates with guys in the backs of cars. But when a spontaneous dinner-and-dash incident goes awry, she finds a much older man, 34-year-old Tom (Jonathan Tucker), who eagerly comes to her defense.

Tom offers to drive Lea home, and thus begins the formation of an uneasy relationship in which Lea receives the focused and seemingly mature attention she craves, while keeping romance secret from her preoccupied mother (Gretchen Mol ). Even beyond the inherently age-inappropriate dynamics at play, it’s clear that Tom is hiding something; we quickly have the impression that this is not the first time that he attacks a young girl, and certainly that it will probably not end well.

Dack’s film will inevitably draw comparisons to Sean Baker’s recent film red rocket; the subject matter is certainly substantially similar in terms of exploring a predatory relationship. Oddly enough, there’s also an opening scene at a similar-looking donut shop, and like the young girl in that film, Lea has an aptitude for musical performance.

What most explicitly differentiates it from Baker’s work is its angle and perspective; red rocket took the predator’s point of view as this film unfolds through the eyes of the ‘prey’. It also has none of Baker’s dark, comedic leanings, offering a more direct and serious look at grooming and sexual possessiveness.

There is emotional and psychological plausibility in Dack’s story and Audrey Findlay’s screenplay; From the start, Tom’s control mechanisms are obvious to us, the probably older audience. The compliments, the subtle ways of feeding off the bad things in her life and using them to draw her closer to him, turn her against her friends, and even make her dependent on him financially.

Lea, as any impressionable teenager would in the presence of a seemingly wise and charming older individual, absorbs her philosophies like a sponge, in an instant parroting cruelly to her often absent mother, “Some people aren’t supposed to have of children.” Unaware of the multi-faceted means by which Tom manipulates her, joy beams across Lea’s face, her sense of self seeming to blossom despite being grounded in a curdled relationship slyly destined to somehow implode. another one.

And that tension, of waiting for the other shoe to drop, defines a lot of Palm trees and power lines‘ of execution, exacerbated by the refusal of Dack to play the scenario with broad blows even caricatural. As such, it’s unclear for very long what Tom’s true endgame is.

The possibility of their squirm-inducing relationship is sure to leave most bothered, and that’s totally the point of course. What follows is a candid but not particularly gratuitous account of overall control, and while some may think some situations could have been removed sooner, it’s still extremely effective. More importantly, until its brutal finale, this story feels painfully real.

Equally important to the quality of the storytelling is the tenacity of the two central performances, which only reinforce the overwhelming authenticity of the piece. In surely one of the most eye-catching acting debuts of recent years, Lily McInerny delivers a riveting controlling performance, of a girl struggling with a stew of joy and anxiety over both her relationship and her place in the world. Dack artfully shoots McIerny in close-up for many key and heartbreaking moments, and she in turn delivers a performance that feels remarkably lived-in.

Playing a role only slightly less difficult is Kingdom star Jonathan Tucker as Tom, giving a persuasively skin-crawling performance as a superficial charmer whose friendly face belies a charged, piercing gaze and darkened heart. It’s a tough role to play without falling into caricature, especially once the details of his story are fully known, but Tucker wins without a hint of repeated mannerism. Gretchen Mol also does a solid job as Lea’s beleaguered mother, though ultimately it’s just one small piece of a puzzle that’s focused intently on her core relationship dynamics.

Bringing together the beautiful script and tightly calibrated performances is a sharp technical package, delivering a slightly washed-out face of California that Dack designed to evoke the aesthetic of his own 35mm photography of the region. Dack also has a clear instinct for knowing when to move the camera and not; one particularly nerve-wracking end-of-movie interaction is largely captured with a locked camera and proves all the more visceral and nauseating for her.

Palm trees and power lines is a tough film to shake and may ultimately prove too uncomfortable for some audiences – more for its emotionally graphic than physical nature – but those who watch it may well be moved with both fury and overwhelming empathy. by the too believable situation that it demonstrates. It’s a raw, heartbreaking, and exceptionally acted out depiction of the ways in which predators can weaponize loneliness and discontent to groom the young.